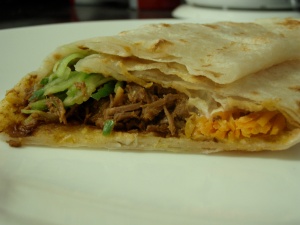 This is one of our favourite dinners.  We used to go to the sunset markets for our fix but taking 2 small children through the markets can be a bit stressful.

Rendang is a lovely spicy slow stew of beef.  I must confess I used a packet curry paste.  With a little tweaking at the end it is fabulous.

So I cubed the beef then browned it (not a step on the packet but one I like to include).  Then I added 500ml of stock and the rendang paste and brought it up to a simmer on the stove

Then, into a very slow oven for as long as you can take the amazing smells.  I cooked mine at 120C for 4 hours.  I used a cast iron pot with the lid on.  You could use a slow cooker, but I do not have one.

I then took it on the stove to reduce the sauce (this took only 5 minutes).

To finish it I added some toasted coconut (this thickens the sauce and adds flavour) and some finely sliced kaffir lime leaf (for freshness and zing).

Finally I served it in a roti canai, this is an asian flat bread.  It is so good and light.  I have made many types of bread but this is one I buy.

Generally the rendang roti gets served with some shredded cucumber and carrot.  I also like a dollop of natural yougurt. 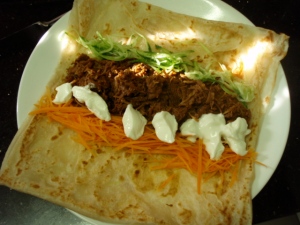 There you have it.  Dinner at my house.

This entry was posted in Uncategorized and tagged Asian, Savory. Bookmark the permalink.

One response to “Beef Rendang and Roti”